As mentioned above, Nextdoor is a free private social network for your neighborhood. Based on your address when you sign up, it automatically assigns you to your neighborhood (all addresses are part of some neighborhood or you can define one) and gives you the option to also interact with neighboring areas as well. You would be surprised at how many of your neighbors are already taking advantage of this free service. 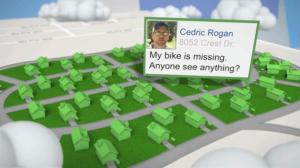 Why is it a great idea to join up? Our number one reason for joining recently is that we found out that our local police department is also on Nextdoor. It is now how they primarily communicate with specific neighborhoods about any crime issues that may be important to know about.

This was really critical for us recently because our neighborhood experienced four break-ins in a two-week period, the last just yesterday.  We experience very little crime and to have this much going on had everyone on edge. We were able to get real-time updates from the police department with the final one being this:

“On June 3rd, 2015 at 1:10 pm, San Ramon Police Officers responded to an in-progress residential burglary at (address deleted). As Officers were responding, the resident stated the suspects had broken the rear window of the home and they were now inside the residence. The first responding Officer was in the area within two minutes of being dispatched and observed a suspicious BMW, with a female in the driver’s seat texting, near the residence. As the Officer arrived at the residence itself, the suspects fled the location and the Officer saw the BMW fleeing the area. Responding Officers were able to locate the BMW and detained the driver and two passengers. The two passengers in the BMW were positively identified as the suspects in the burglary. All three involved individuals were arrested and booked at the Martinez Detention Facility.”

They actually  found the car near our home! We saw all the police cars but didn’t know what was happening at the time. Crazy…  The point is, there was a dialog going on with the police department and we were getting regular updates on their investigation. They were pretty certain it was the same group committing the break-ins and would be a matter of time before they were caught in the act.  With homeowners keeping a sharp lookout for anything suspicious we were pretty certain it was a matter of time as well.

We can’t say that everyone’s experience with Nextdoor will be as positive as it is a social network, after all, and there can be some ding-dong stuff that goes on just like any other social network.  But if you sign up with purpose and chose to get alerts for crime and safety posts, it can be a great way to keep you, your family and your neighborhood safer. Check it our and see if it is for you.

I'm a Broker/Realtor in the San Ramon Valley. A trusted advisor in the local community: We help people buy and sell homes. We counsel them thoroughly. We negotiate to their advantage. We keep their stress to a minimum. And we love what we do!
View all posts by CarolSawdey →
This entry was posted in Uncategorized. Bookmark the permalink.